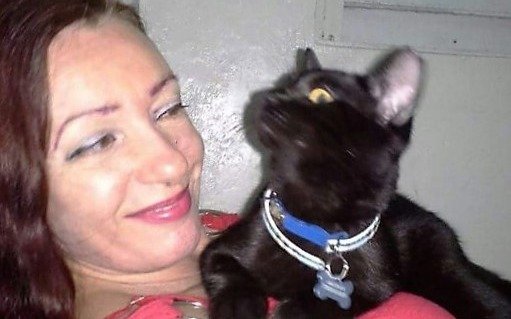 Desideria is suing for the unlawful seizure of some of her rescue cats by an "extermination" company in Puerto Rico. The "exterminators" were hired by her apartment complex and euthanized the animals which were healthy, vaccinated, and chipped, and ready to go to new homes. In addition to wanting to relocate her rescue "For the Love of Damien" to a more amenable location she will need donations for legal fees).

My friend Desideria went to Puerto Rico about 7 years ago with her fiance' to visit his relatives and for her to continue studies in Flamenco dance, etc. Desideria was a trained dancer and long time performer in NYC and had always wanted to learn things possessing several certifications in everything from natural healing therapies and massage and she had also gone to gourmet cooking schools.

When Desideria and Jorge' went to P.R. they had no idea tragedy would befall them, they just went about feeding the stray cats and even starting a sanctuary called "Puerto Tierra Cat Rescue." Desideria and Jorge arranged for spay, neuter, and chipping  of countless cats and participated with another organizaton that "rehomed."

The first disaster to strike the area was the sales tax increase that hurt tourism and also Desideria's ability to work as much. Jorge's health was also failing from years of hard work around hazardous materials. The next blow was the "Chicungunya Fever" which sickened people- Desideria's and Jorge' both got it and Desideria was unable to work for six months because of the attack on her joints and the pain. Then the hurricanes hit and no one was working and they were evicted with their cats when all services had not even been restored. They barely made it to another place when Jorge's kidneys eventually started failing. The plan was to return to the United States when he got his Social Security, but alas Jorge' died in April only a few weeks from getting it. The owner of their current apartment building was planning to sell the building and told her to get out only two days after Jorge's death. Desideria has been ill and hungry wanting to give the cats food first priority. Her dream now is to raise funds so she can come back home to the mainland with her cats and start another sanctuary. Please donate to this lady so she can finally leave behind the nightmare she has endured with the loss of her loved one and all the other tragedies that have befallen them in Puerto Rico.